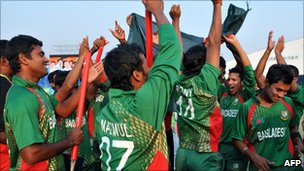 Bangladesh has won a first-ever gold medal in the Asian
Games, with its cricketers defeating Afghanistan in the Twenty20 competition in
China.

They defeated Afghanistan by five wickets in the men's final with just three
balls to spare.

Bangladesh restricted Afghanistan to 118-8 but had some anxious moments in
the reply before chasing down the total.

The Afghan cricketers made the final when they unexpectedly beat
Pakistan.

The Bangladeshi captain said the pressure of playing in a final in a major
tournament had been enormous.

The team's coach said Afghanistan's rise had been "remarkable".

"We are celebrating, but I hope Afghanistan will celebrate too because they
deserve the silver medal," Imran Sarwar said.

"They are a very good side and I am sure they will become a top team in the
near future."

Mohammad Shabbir hit successive straight sixes off the 19th over as
Bangladesh raced to the winning target of 119.

Afghanistan's 118-8 off 20 overs was largely thanks to an unbeaten 38 off 36
balls by Mohammad Asghar and a battling 25 by Shabbir Ahmed.

"Afghanistan fought really hard, but it's exciting for us that we have won
our first ever gold medal at the Asian Games," Shabbir