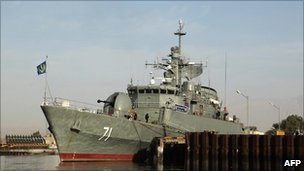 The Egyptian authorities have agreed
to allow two Iranian warships to transit through the Suez Canal to the
Mediterranean Sea, state media report.

Iran's request stated the vessels would have no military equipment, nuclear
materials or chemicals on board, the defence ministry is quoted as saying.

Iranian officials say the warships are headed to Syria for training.

Israel's foreign minister has expressed concern about them using the Suez
Canal, calling it a "provocation".

There has been no comment from Israel since Egypt gave its approval.

It is believed to be the first time since Iran's 1979 Islamic Revolution that
Iranian warships have attempted to pass through the Suez Canal.