Login + Create my blog
<< Israel's Assault on Gaza Obscures... The ‘Core Issues’ of the Israel-Palestinian... >>

Fatima Helles desperately wants Israel's war with Hamas to end. Her family of 19 was driven from its home in the northern Gaza Strip by fierce Israeli shelling. All of them moved in with her husband's family, but the fighting followed them there. They are now living under a tree at Gaza City's main hospital, Shifa.

But when asked whether she supports efforts to negotiate a cease-fire, the grandmother hesitates.

“I don't want to die. I don't want my people to die,” she said. But she doesn't want life to go back to the way it was either.

“We can't breathe,” she said. “Most of my kids can't find work. We live on handouts.” 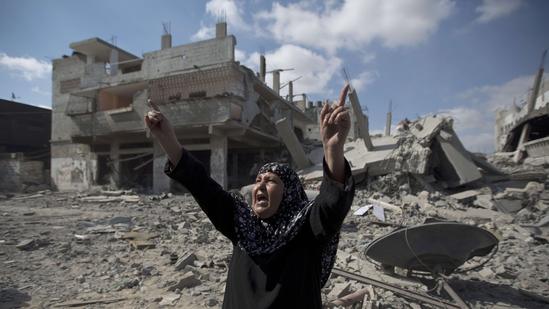 CAPTIONGaza City rubble
Mahmud Hams / AFP/Getty Images
A Palestinian woman reacts upon seeing destroyed buildings in the Shejaiya district of Gaza City. Gaza residents revisited ravaged areas of Gaza City during a 12-hour truce that began early Saturday.
CAPTIONBody found
Said Khatib / AFP/Getty Images
Rescue workers find the body of a member of the Najar family in the rubble of their home after an Israeli airstrike in the southern Gaza Strip.
CAPTIONFuneral procession
Carolyn Cole / Los Angeles Times
The body of 1-year-old Suha abu Misleh is prepared for burial along with nine others. All were killed in the attack on a United Nations shelter at a school in Beit Hanoun, in the Gaza Strip.
CAPTIONWest Bank protest
Nasser Ishtayeh / Associated Press
An Israeli soldier aims his weapon at a Palestinian during a clash in the village of Hawara, near the West Bank city of Nablus. Palestinians in the West Bank staged protests against Israel's military operation in the Gaza Strip.
CAPTIONPalestinian protest
Abbas Momani / AFP/Getty Images
Thousands of Palestinians in the West Bank marched in protest against Israel's military offensive in Gaza, leading to confrontations with Israeli security forces at a checkpoint between Jerusalem and Ramallah.

It is a common sentiment on the Gazan side of this war. Despite more than two weeks of intense shelling that has claimed nearly 700 Palestinian lives and sent more than 100,000 people fleeing from their homes, many insist that they want their leaders to keep fighting until they achieve Hamas militants' stated demand: an end to the years-old embargo on Gaza.

Israel and Egypt impose tight restrictions on movement in and out of the narrow coastal strip, which has been controlled by the Islamic militant group since 2007. They say the blockade is necessary to limit Hamas' access to materiel, including the rockets it has been firing by the hundreds at Israel.

But Palestinians say it has choked economic development in Gaza, separated families, prevented young people from getting an education and kept residents isolated from the world.

“I think the fact that people, even in the midst of this terrible physical destruction, are still talking about the economy is testament to how devastating the closure has been for people living in Gaza,” said Sari Bashi, cofounder of Gisha, an Israel-based legal center that advocates for greater freedom of movement for Palestinians. 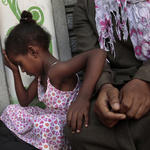 In the Persian Gulf emirate of Qatar, the exiled leader of the group's political bureau, Khaled Meshaal, denounced Israeli forces as “murderers” and told journalists that Hamas would accept only a cease-fire that included a lifting of the blockade.

“Everyone wants us to stop fighting first and then negotiate our demands,” Meshaal said. “We have tried this before and there were no results.”

The day brought added international pressure on Israel, with the U.N. Human Rights Council voting to investigate allegations that Israel was committing war crimes in Gaza. Earlier in the day, the U.N.'s high commissioner for human rights, Navi Pillay, said such an investigation was a “strong possibility.”

I don't want to die. ... [But ] we can't breathe. Most of my kids can't find work. We live on handouts.- Fatima Helles, a Palestinian, on whether to support a cease-fire without an end to the blockade of the Gaza Strip

The United States abstained from the vote, and Israeli Prime Minister Benjamin Netanyahu's office called the council's action a “travesty.”

In Gaza, the ground shook with heavy explosions and smoke hung in the air as Israeli bombardment hit northern, southern and eastern neighborhoods in the Palestinian territory. Israel carried out afternoon and evening bombings of Wafa hospital in Gaza City, saying Hamas had turned the rehabilitation compound into a command center and weapons depot, as well as a staging ground for firing on Israeli troops. The hospital had been evacuated, Israel said.

This is the third Gaza war fought between Israel and Hamas in less than six years.

“They need to find a solution,” said Rahma Athaway, 33, as she lay in a bed at Shifa hospital. Blood from shrapnel wounds to her back and sides seeped onto the sheets. “This is enough. We shouldn't have to go through a war every two years.”

cComments ADD A COMMENTSEE ALL COMMENTS
102

Israel does not allow Gazans to operate a seaport or airport. Travel to Israel, which is needed to enter the West Bank, the much larger Palestinian territory, is restricted to “exceptional humanitarian cases,” mostly medical patients. With limited exceptions for humanitarian projects, the import of construction materials is not permitted. Most other civilian imports are allowed, but residents of the coastal enclave aren't allowed to export to Israel or the West Bank, which once accounted for 85% of their market.

Disputes among Palestinian political leaders have added to Gaza's economic woes. When Hamas took over the enclave and started appointing its own government workers, the Palestinian Authority in the West Bank refused to pay their salaries, although it continued to pay its employees, an issue that has not been resolved despite the recent formation of a unity government.

Hamas used to derive a lucrative income by taxing the fuel, cigarettes and other goods that were smuggled into Gaza through tunnels to Egypt. But the tunnels were shut down after the ouster last year of Egypt's Islamist president, Mohamed Morsi. Hamas is suspicious of Egypt's new government, led by former Field Marshal Abdel Fattah Sisi.

Residents are left to struggle just to get by.

At a cafe along the Mediterranean Sea, fishermen sit playing cards. Shells fired from Israeli ships explode with a low thud. A drone whines overhead.

“Nine years ago, fishermen were able to go 12 [nautical] miles out to sea,” said Khames Gassim, 47. “Those were good days.... We caught lots of different kinds of fish in big amounts.”

Over time, however, Israel reduced the fishing zone along Gaza's coast to three nautical miles.

“That started to affect us financially,” Gassim said. “I had four children at university … but I had to pull them out because I can't afford the fees.”

These days, the catches are so small that they don't cover the boat's fuel cost, he said. So he had to sell his boat and look for other work.

“They can't just open a portal for people to escape,” he said, referring to an Egyptian proposal to reopen the Rafah crossing. “What we need is a functioning port with jobs.”

Mohammed Mahalawi spends up to three hours a day waiting to fill jerrycans at communal taps operated by a mosque. Even before an Israeli airstrike knocked out a pump in his area last week, he did not get enough running water in his house to provide for the 11 family members. The arrival of three families displaced by the fighting has increased their number fivefold, he said.

Mahalawi keeps three tanks on his roof to get by during the dry spells. But to fill the tanks, he needs electricity.

Drinking water can be purchased from trucks in the neighborhoods. But it would cost him the equivalent of nearly $100 a day to keep his tanks full , too much for Mahalawi. Although he has a degree in business administration, he has been able to find only odd jobs. For about six months, he worked on a construction site, helping to build a house. But when the materials ran out, the building stopped.

Although expressions of ambivalence are common among Israelis wrestling with the question of how far to press this conflict, which, as of Wednesday, has cost the lives of 32 soldiers and two civilians, Mahalawi says he's committed to the Gazans' larger goal.

“Of course I'm putting a lot of hope in the truce talks,” he said. “But if they don't lift the siege, I think we would prefer to stay at war.”

Published by Alamgirkingpin
<< Israel's Assault on Gaza Obscures... The ‘Core Issues’ of the Israel-Palestinian... >>