The Story of Shah Jahan and Eternal Love 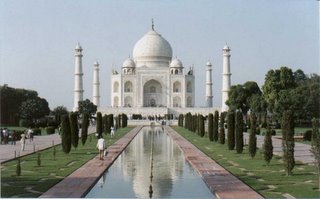 
Shah Jahan assumed his kingdom by snatching it away from his father Jahangir and putting him in jail. However the same fate awaited him in his life. Shah Jahan is remembered much more than Jahangir and that is largely because of his excellent buildings at ShahJahanabadand more famously the Taj Mahal

Shah Jahan had a wife called Mumtaz. She was so beautiful that the moon hid itself in shame before her said the poets. He loved her deeply and was pained that she was going to die. He asked her what he could do to immortalise their love and she told him the famous words

Build me the most beautiful monument of love in the world.

And so upon Mumtaz's death, Shah Jahan used the finest of marble and built the Taj Mahal as her tomb. The entire Taj Mahal is built of purest white marble. Mumtaz is buried there.

Taj Mahal Story
Beginning of a Love Story
The story goes back in 1607, when a prince of the royal Mughal household strolled down the Meena Bazaar, accompanied by a string of fawning courtiers, he caught a glimpse of a girl hawking silk and glass beads. Five years and a wife later (in those days princes did not marry for love alone) the regal 20-yr-old went to wed his 19-yr-old bride. It was a fairy tale union from the start, one that withstood court intrigues, battles for succession and finally, the grand coronation. And when she died on the 19th year of their marriage, he etched her story in stone. The Taj Mahal is the living symbol of the monumental passion of Shah Jahan and Arjumand Banu. Which other love story has so grand a memorial?
After their wedding, the prince was with Mumtaz Mahal day and night. She was beautiful and demure; the royal poets wrote that her loveliness made the moon hide its face in shame, while the stars extinguished their light in fear of being compared to her radiance. She was so intelligent that she soon became a political adviser to her husband. She was charitable, giving food to the peasants and silver to the beggars who called to her each morning outside the brick walls of the palace. She was compassionate, every day drawing up lists of helpless widows and orphans and making certain that the prince attended to their needs. She was generous, supporting hundreds of poor families and arranging pensions for hundreds more. She was, in short, a model of feminine virtue.
Diesen Post teilen